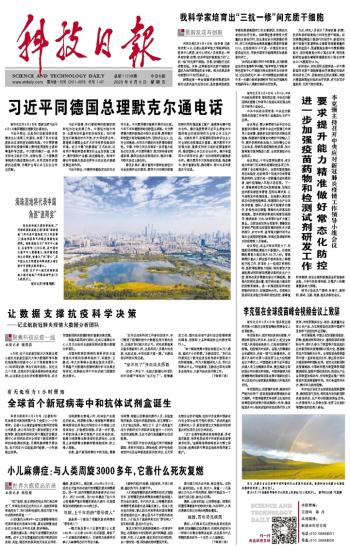 Focus on the front line of science and technology anti epidemic

At the beginning of June, the big data science and brain function innovation center of Beijing University of Aeronautics and Astronautics (hereinafter referred to as gaojingjian Center) located in block g of the new main building of Beijing University of Aeronautics and Astronautics was still quiet, and the students had not yet returned to school. Novel coronavirus pneumonia has been running at high speed in the past few months, and the data and reports from here have become an important decision support for the new crown pneumonia epidemic prevention and control in China.

The novel coronavirus pneumonia epidemic data analysis team is also busy with the server as the main body.

Under the coordination and organization of the informatization special class of the scientific research group of the joint prevention and control mechanism of the State Council, Li Jianxin, Wang Jingyuan, Li Daqing, etc. took the lead in establishing an emergency team to carry out epidemic prediction analysis and decision support research based on big data, and the results were applied to the central multi department epidemic prevention and control decision-making.

"In his reply to the scientific and technological workers, the general secretary specifically mentioned tackling key problems in the application of big data in epidemic prevention and control, which is a great recognition to us. Research results can truly serve the country and the people, which is the greatest achievement of scientific researchers. Compared with these, hard work is not worth mentioning. " Wang Jingyuan told Science and technology daily.

Without a single order, the action of big data analysis team of Beihang comes from the simple "unable to sit". At the beginning of the outbreak, there was no dynamic epidemic prediction model in China, and the figures given by various models in the world were very frightening.

"A model predicts that more than 400000 people will be infected in China, causing a lot of panic." Wang Jingyuan recalled, "we felt at that time that this figure should not have considered China's strong prevention and control measures. As big data researchers, we have to do something. " During the winter vacation, Wang Jingyuan immediately contacted students from all over the country by telephone, and everyone began to work online.

Big data is a comprehensive subject. "In particular, disease prediction models involve sociology, infectious disease management and other aspects." Wang Jingyuan said that he immediately contacted Wu Junjie, director of the data intelligence research center of Beihang School of economics and management, and other co authors, "everyone has no second words, and an interdisciplinary temporary team has formed rapidly.".

"At that time, I just wanted to do something, but I really didn't know what role our work could play." Wang Jingyuan confessed.

After several days of hard work, Wang Jingyuan's team built the first prediction model on January 25 by using the method of integrating big data of urban population flow with epidemic data. This is also the first known big data model for epidemic prediction in China.

"According to this system, Jianxin's team produced the first internal report on January 27. I asked him when the domestic epidemic would be a node. He said it would be April." Liu Xudong, executive director of gaojingjian center, recalled that for the sake of caution, we decided to put this report on the official website of gaojingjian center.

Meanwhile, Wang Jingyuan released his research report from the team through the official account of the AI technology and Management Application Research Institute, and gained nearly 40 thousand of his views on that day.

Unexpectedly, both reports were seen by the decision-making departments.

Experts from the big data special class of the epidemic prevention and control working group of the joint prevention and control mechanism of the State Council and relevant persons in charge of the E-government Office of the general office of the State Council have noticed their research results. On February 1, Wang Jingyuan's team received an urgent task from the relevant departments, asking them to provide epidemic forecast data and analysis of epidemic inflection points at some key time points for the reference of the central government. Relevant units also entrusted Li Jianxin's team to carry out big data thematic analysis on Wuhan's regional materials and transportation security, medium and long-term epidemic trend prediction and other issues, so as to form a special report. Since then, the big data analysis team of Beihang has entered the task oriented research stage of government departments at all levels, and several previously scattered teams have started to work together.

"Although we have confidence in our own data, there was a lot of pressure at that time. Behind the analysis results was the central government's decision-making. A little carelessness may affect the effect of epidemic prevention and control." Li Jianxin said.

In order to ensure the absolute accuracy and reliability of the analysis and prediction data, they repeatedly deduce, through the cross validation of a variety of technical routes, integrate a variety of models for fusion prediction, and finally get the most reliable analysis results.

After the scientific research ability has been recognized, a series of important tasks have come. From the domestic epidemic forecast and material support analysis in February, to the analysis of returning to work and production, prevention and control policy evaluation in March, to the global epidemic tracking forecast and overseas import risk analysis in April, in the more than 100 days after the outbreak of the epidemic, the team has been working on the wall chart to make decisions for the general office of the State Council, the joint prevention and control mechanism of the State Council, the National Health Commission, the Ministry of science and technology, the Ministry of foreign affairs, Beijing Municipal prevention and control office, etc Policy departments provide various epidemic forecasting and analysis services.

"The strong scientific research strength of our team is closely related to the interdisciplinary background of the high-tech center and a large amount of previous research accumulation." Liu Xudong said that the researchers of the center come from the computer, reliability, economic management and other colleges of Beihang University. "We are originally a whole, and the cooperation is very smooth. The underlying technology is interlinked. On this basis, we work together to tackle key problems according to the needs of different departments." Liu Xudong said.

In this highly effective team, "the post-90s" are impressive, "Liu said more than once.

After hearing that an emergency research team would be set up, Fu Yingying, a second graduate student, gave up the opportunity to go home and reunite with her family and stayed in school to undertake the task of managing the computing equipment in the laboratory.

"When the epidemic situation was most tense, I couldn't enter the laboratory, so I had to direct her to operate by telephone." Wang Jingyuan said.

Three months did not leave the campus step, Fu Yingying said with a smile, she formed the habit of watching "news network" every day in this winter vacation. "At the beginning, the channels for collecting data and policy information were limited, and watching the news was an important way." Another reason, she said, is that the sound of the TV can dispel the loneliness of being in a dormitory.

During the day, collect data, train models, analyze and forecast, at night, sort out historical errors, write and release reports, and hold online meetings. Fu Yingying said that the experience in this special period is her wealth. "In epidemic prevention and control, a large number of" post-90s "medical staff have demonstrated the responsibility and responsibility of young people, and I am particularly proud to be one of them with their knowledge."

Wang Jingyuan was also moved by Wang Peiyu, a direct doctoral student. "Some time ago, when chatting, he inadvertently said that his father was a member of the Hunan medical aid team in Hubei, and his mother was a local doctor." The story of a family of three fighting against disease on different fronts is moving.

There is also a visit to Rutgers University, which is located far away in the severe epidemic area of the United States. As the student leader of the data analysis group, he overcame the time difference and discussed with Liu Shiyan, Zhang Shuai, Fu Xingli and other domestic team members remotely every day. "Every time he encounters analysis problems, he can quickly give ingenious solutions. In carrying out an emergency report task for several consecutive days, his dormitory has run out of food, but he didn't find it." Li Jianxin said.